Salem Common, the large, attractive park in the heart of the city, has been public land since Salem’s early days in the 1600’s. Originally, much of the eight acres was swampy, hilly land with several ponds. The higher ground was used as pasture for goats and cows which were brought out to graze for the day and then returned to their owners at night by the town cowherd.

The dry part was also used as the designated area where people could practice shooting to prepare for military duty. Salem Common was called “Ye Olde Training Field” when Captain John Endicott organized the first training day to drill settlers in 1630. The British Puritan settlement was largely responsible for its own defense. The colony required all males between the ages of 16 and 60 to possess arms and be prepared to participate in the defense of their communities.

In 1637, the first regularly scheduled militia drill of the East Regiment, known as the “First Muster,” took place on Salem Common. For the first time, a regiment of militia drilled for the common defense of a multi-community area, thus laying the foundation for what became the Army National Guard. Needing a place for regular military drills, it was voted in 1714 by the commoners to be “forever kept as a training field for the use of Salem.”

From 1775 to 1783, Salem played a significant role in the Revolutionary War for Independence against the British. Leslie’s Retreat, which occurred on Salem’s North Bridge, is considered by many to have been the first armed resistance of the American Revolution. Salem also had 158 Privateer Ships that captured 444 prizes (enemy ships) over the course of the war, more than half the number taken by all the Colonies.

General George Washington, through his popularity as a military leader and statesman, used his first year as president to personally tour each of the 13 states in order to build national unity. On October 29, 1789, General Washington visited Salem to thank those on the North Shore for their part in the Revolution. He rode into Salem mounted on a white horse to the sound of church bells and cannon fire from Winter Island. Huge crowds followed the celebrations as he reviewed the troops, was feted with speeches downtown, attended a Ball at the Assembly House, and watched a fireworks display in his honor.

In 1801, Salem’s Elias Hasket Derby (the 2nd), who was a colonel in the militia, led a committee to raise $2,500 to improve the condition of the Salem Common. Ponds were filled in, the surface levelled, and rows of poplar trees were planted. The following year, by order of the town selectmen, the Common was renamed Washington Square in honor of the nation’s first President. Unfortunately, all the poplar trees were destroyed in 1815 by a great gale and were replaced with elms and maples several years later.

Park improvements continued with the erection of gates and a fence. The abutting land quickly became desirable for residential use and an upscale neighborhood grew. For two decades thereafter, a number of the city’s leading merchants built imposing Federal mansions facing the Common. Houses in various revival styles were later built on remaining lots, resulting in an impressive concentration of early to mid-19th century dwellings, many of which remain today. 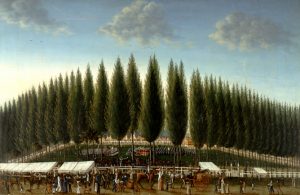 Samuel McIntire, Salem’s distinguished woodcarver and self-taught architect, was commissioned in 1805 to design and construct four gateways for the four entrances to the Common. This included two elaborate and embellished arches (East and West) and two turnstiles (North and South). The main gateway (the West Arch) was designated the “Washington Arch” and was located on the westerly side of the Common at the head of Brown Street.

McIntire molded his designs based on those used in ancient Rome in triumphal processions. The Western arch featured ornate carvings including an oval portrait of Washington flanked by swags of drapery, the Massachusetts state emblem, and a gold eagle to symbolize the recently formed United States of America. 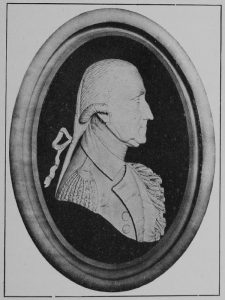 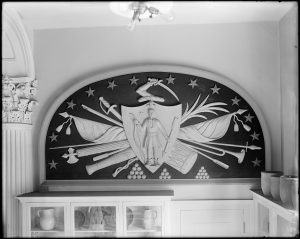 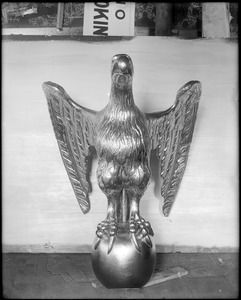 For the West Arch, McIntire carved a medallion likeness of General Washington, thirty-eight by fifty-six inches in size. When the arches were taken down in 1850, this medallion was removed to the Town Hall and is now held by the Peabody Essex Museum (PEM). It was carved in wood after drawings from life made by McIntire during Washington’s visit to Salem in 1789.

On August 31, 1824, one of George Washington’s most influential generals during the Revolutionary War (and America’s favorite Frenchman), the Marquis de La Fayette, received a hero’s welcome in Salem. Despite the rain, thousands of people came to Washington Square to celebrate their famous guest. 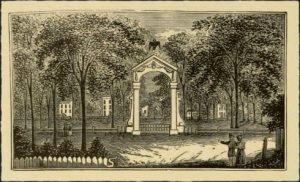 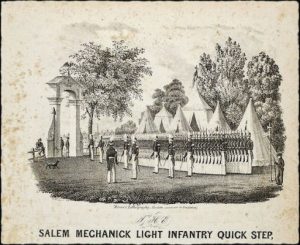 In 1850, the Common was again remodeled adding walkways and the cast iron fencing. The arches were removed at this time. The Salem Common fence was listed on the National Register of Historic Places in 1976. In 2007, the Salem Common Neighborhood Association (SCNA) successfully nominated the Salem Common Fence for placement on Historic Salem, Inc.’s Endangered Historic Resource list.

In 1976, the Bicentennial Commission commissioned a reconstruction of the Western Arch and designated it the “Washington Arch”.

This Arch was constructed of metal and wood and located at the corner of Washington Square South, facing where the Tavern at the Hawthorne Hotel is now. Carl Peterson contributed the architectural drawing for the Arch. Ramon Parga of Salem led the overall fabrication project supported by skilled woodcarvers including international experts such as Leslie Martin Randell. The 101st Battalion National Guard Corps of Engineers of Reading MA, provided expertise with respect to the steel fabrication and construction. Johannes Maki was the project supervisor. Reno Pisanno served as consultant. James Kieran and Richard Redfern were the carpenters; They were assisted by the staff of the Essex Institute (now PEM) who contributed substantially to the venture.

Mayor Levesque formally dedicated the Arch on July 4th, 1976. The reproduction Arch was showcased in the PEM’s 2007 exhibit Samuel McIntire: Carving an American Style – Symbols of the New Republic.

The Arch was moved in the mid 1980’s to the top of Winter Street as part of the rehabilitation of the Common. The Arch was neglected until 1988 when the SCNA and a visiting ship of Naval cadets began basic restorative efforts such as painting. 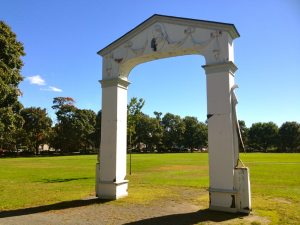 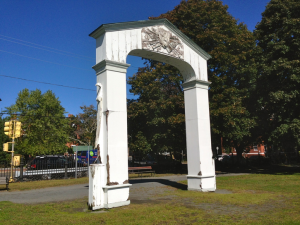 The Washington Arch, 2010 through the Present: Restoration

The 1976 Arch continued to deteriorate over the years, so the City of Salem moved it to its current location in 2010 and requested the SCNA to lead community efforts to raise funds and make plans to restore the Arch.

In 2013, Winter Street Architects created a detailed report on the Arch’s history, restoration parameters, and recommended repairs. The rotten and missing parts of the Arch were replaced, but the carved pieces were not replicated because lack of funding. Due to the ongoing dedication of the SCNA and local partners, the restoration of the Arch continues. 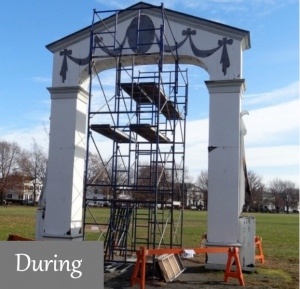 Over the years, many organizations and citizens have helped with the ongoing Arch restoration including but not limited to the folowing:

During this period, on January 10, 2013, President Obama signed Public Law 112-241 that named Salem as the birthplace of the National Guard in 1637. The National Guard hosts their annual Muster on the Common in honor of their founding as well as Washington’s original visit.  Plans are underway to use the Arch as the ongoing Muster assembly point.

In December 2021, this restoration eﬀort achieved multiple signiﬁcantmilestones. Under the City’s auspices, the entire surface beneath the Arch has been remade with brick, masonry,and garden bedding. The hardscape consists of a beautiful rose compass centered directly underneath, with a radial north-south path emanating from the Arch. Beds for future plantings were created on either side of the pad and will be watered via an extension of the Common irrigation system.

The SCNA also funded the creation of an explanatory sign located adjacent to the radial path. The text and imagery were designed to explain the Arch’s historical signiﬁcance and inspire support for this public memorial space.

Going forward, the SCNA will be funding decorative plantings in the spring as well as a  paint refresh of the Arch. This will be followed by the ﬁnal restoration phase which will include an oval medallion of George Washington, and new reproductions of the eagle, shields, swags, and the seal of Massachusetts.

Through the hard work and dedication of City Staff working closely with the SCNA’s Board and Members, supported by the generous contributions of our donors, the Washington Arch is well on its way to completion. Please consider donating to help make this restoration a reality for our future generations and donate using the button below.